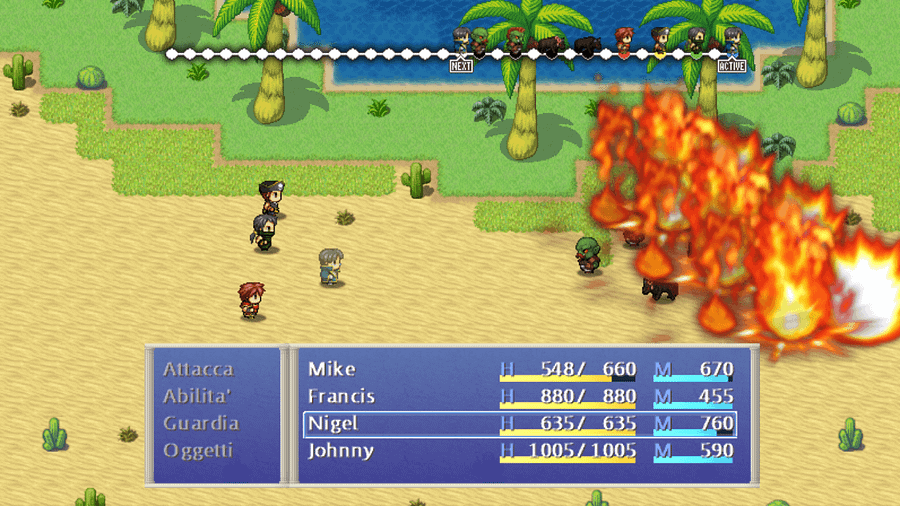 Hello, dear reader, I hope you’re having a good day. I’m not being paid to write this blog, and it contains information based on my opinions from playing Doom and Destiny on iOS. Doom and Destiny is rated 12+ on the App Store for Infrequent/Mild Alcohol, Tobacco, or Drug Use or References; Infrequent/Mild Horror/Fear Themes; Infrequent/Mild Mature/Suggestive Themes; Frequent/Intense Profanity or Crude Humor; Infrequent/Mild Sexual Content and Nudity; and Frequent/Intense Cartoon or Fantasy Violence. If you’re mature and wise enough to qualify as the audience for a movie as immature and raunchy as Pitch Perfect or the Transformers films, then you’ll be mostly prepared for the college level curses and innuendos Doom and Destiny presents. A few f-bombs have been dropped along with colorful rude language. The violence is depicted by 16 bit-looking sprites so it’s not a big deal. The game hasn’t had anything graphically represented parents should worry about within the first two hours of gameplay other than the written dialogue. I haven’t finished the game yet so keep that in mind.

Review:
Doom and Destiny is an RPG (role-playing game) available on Xbox 360, Steam, iOS and Android. The game doesn’t have in-app purchases unless you upgrade from Doom and Destiny Lite (the free version). Doom and Destiny is a loving parody, an homage to the glorious RPGs of the past, and it’s filled with nerdy references. It feels like playing an older Final Fantasy (like IV before the reboot) combined with the irreverent comedy of a D&D group trying to break the game any way they can. Seriously, your mage learns an attack spell by guessing the Nameless Villain’s name. The game is nicer than Final Fantasy, which veterans may or may not enjoy. Personally, I like saving the game anytime I want to, thank you very much. 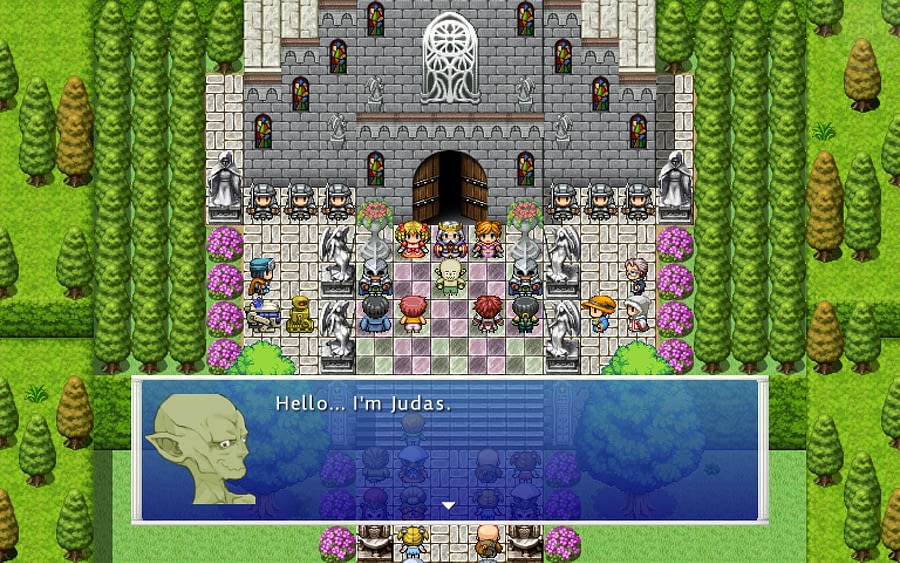 Yes, everything in the game points to Judas betraying your party. I’m not there yet.

Time: Doom and Destiny takes less time than similar RPGs. You can simply hold the Attack function down to speed up random encounters. This lets you get to the meat of the story much faster. It also makes exploring less of a hassle.  I’m betting you can speed run it, but if you want to enjoy the game and seek out its dark secrets it’ll probably take 20 hours. There are plenty of secrets! Wandering around looking for the first real quest dungeon, Orcus’ Lair, I bumbled into a secret trainer as well as several border towns filled with better equipment. Note the game encourages grinding by rewarding you with items for defeating a certain number of enemies. Killing 50 skeletons may net you a masterwork sword. A great item in the early game.

Pros and Cons: The music is a reminder of halcyon questing days, nostalgic, and heartfelt as a family photo. The humor makes you feel like you’re hanging out with some quirky, immature college friends trying to break a game together. The downside is you’re hanging out with immature college kids. Yeah, I personally wish the game was more family-friendly. The developers hit the note they wanted though and it does make a fun gaming experience with occasional cringing. The battle graphics remind me of 16-bit sprites and dialogue character headshots appear like 32-bit sprites. The controls on iPad take some getting used to. Thankfully, the help menu has you covered and the developers also made a YouTube video tutorial in addition to a good beginning tutorial. The game has a unique leveling and skill system. You can try to maximize one character attribute but doing so will decrease the number of skills you can equip. Each character’s class is locked so there’s a limited amount of customization.

Overall Impression: If you love JRPGs (Japanese RPGs) and want a fun streamlined blast to the past, you’ll enjoy Doom and Destiny. As long as you’re old enough for the jokes and references. If you want a more highly customizable, tactical RPG then Doom and Destiny isn’t for you.

I hope the review and tips help you out, dear reader! May your Doom never appear and your Destiny be bright!

Links: The wiki for secrets is at http://doomanddestiny.wikia.com/wiki/Secrets_(Doom_%26_Destiny)
and another review is at http://toucharcade.com/2013/10/29/doom-and-destiny-review-a-funny-parody-with-a-solid-game-backing-it/.

Disclaimer: I’m not being paid by HeartBit Interactive or anyone else to write these tips. The only money I could make would be through advertising on this site or on YouTube at this point in time. I don’t take responsibility for the content on sites linked to from this article. Note, these images were found online and not taken by me. I can vouch for Judas being a story character and the graphics represented being accurate to the game.