Jalinon Avatar in a My Hero Academia style 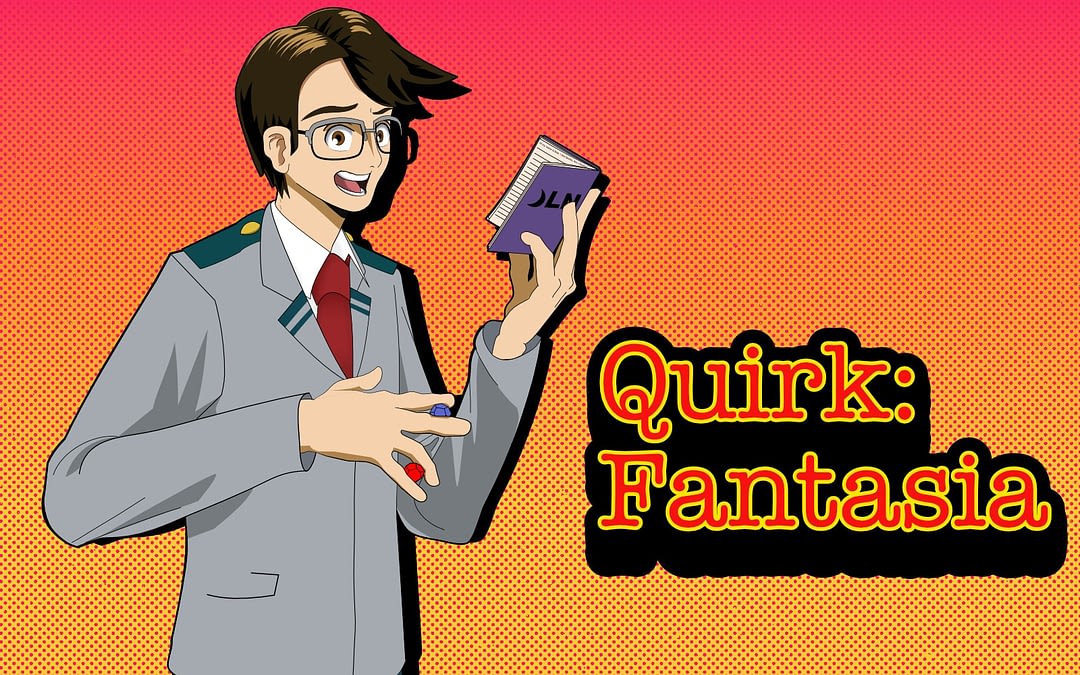 Hello, dear reader, I hope you’re doing well. Recently I made this vector and raster art image in Affinity Designer and posted it on the Lunar Nebula Facebook page (The one here is actually lower quality due to file size compression). I realized writing down my process might help other artists getting started with vector art programs. Affinity Designer is useful because it also allows raster effects to be used with vector artwork so this process may not work in all programs.

A few of my thoughts behind the piece. I like creating things. I enjoy games, reading, and I thought combining some iconography with the UA student uniform would make them pop out without taking up too much space. Fantasy seemed like a proper Quirk idea for a creativity power and the fantasy of the superhero setting in general. Fantasia is simply the Italian word for Fantasy or imagination which has made its way into English (according to Oxford’s dictionary), and it also brings to my mind Disney’s masterful combination of animation and music in his Fantasia film.

I started with finding references for My Hero Academia characters, dice, glasses at an angle, took a photo of myself in a similar pose, and sketched out the idea. Simple steps, but useful. I then used the pen tool to outline important shapes like the hair, face, and body. In some areas, I wouldn’t use any fill color within the unique curves I’d created. Examples are the crease lines in the clothing, the ear, the lines for the knuckles on the character’s left hand, and some of the fingers.

Due to this being made with vectors, I could then fine-tune every curve’s line weight (pressure curve in the Affinity Designer Stroke panel) to make lines closer to the viewer thicker, and lines further away (or closer to light) thinner. This is time-consuming, but so is spending 10 years training your hands to draw perfect lines.

Once I’d finished making the lines how I wanted, I went into a new layer underneath the ink-like curves. I followed my previous lines to create flat colors by using the pen tool without a stroke underneath the ink lines. Zooming in helps a lot when your lines are this thin. Flatting the colors gave me some flexibility with coloring and using clipping masks with shapes for shadows and highlights without affecting the ink lines on top. Note, there are vector persona brushes and separate pixel persona brushes. You may get the effect you’re looking for by checking another persona’s brushes if you can’t find it in your preferred persona. Raster brushes do not show up in the vector persona’s brush panel.

Before I did this time-consuming method I tried expanding the strokes, adding them together, creating a big rectangle to cover the drawing with, and then dividing to get my flats. Sadly, this didn’t work. Maybe I did the technique wrong, or the mobile version might not be robust enough to accomplish the task. I’d found a video on YouTube with an older Affinity Designer version where this technique worked marvelously. Regardless, it didn’t work for me and I was able to undo the damage. I would recommend always saving periodically, grouping and duplicating important parts of your work just in case anything weird happens when you try a new technique. Especially since digital art programs can crash!

A quick tip for when you can’t layer something in a way it overlaps another object how you want, just use the pen tool around the object, like the tie in this picture and the bottom lapel on the character’s left side of the body. I had to make it on a higher layer, and traced around the tie to get the effect I wanted.

For the background I used a vector gradient, then switched to pixel persona to use a raster brush (FX – Toner (Extra Large)) from Christi’s Comix Toolbox set to a very large size, and finally, I used the vector text tool with a few strokes around the initial red text. I added the yellow and black strokes. Just so you know, I did this using the mobile version of Affinity Designer and it wouldn’t let me do any stroke effects on my text at first. I had to switch to pixel persona and back to vector before it worked. To make the black stroke look like the kind of outline I wanted I simply duplicated the text in layers underneath the original and shifted the text down a little bit at a time until we arrive at the final result:

Some YouTubers I found helpful or at least fun to watch for info (I take no responsibility for any of their content. I don’t remember cursing or anything in what I found but it’s a possibility): 7th Season Studios, Frankentoon TV, Affinity Designer’s channel, Envato Arts, Ghost Paper, Prevalent Arts, Affinity Tutorials, Jago vector, Isabel Aracama, Horrordice and ArtofMonjirou. I hope this information can help you, dear reader!